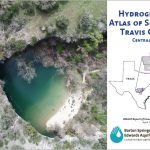 Due to file-size limitations, only the Executive Summary is provided under the ‘Report’ link above. For the full 80 page atlas click here to download it via Dropbox. There is an option to download a PDF “print” version (170 MB) or a PDF “web” version (70 MB). Digital data are available upon request.

Groundwater is an important resource for water supply, economic, and environmental needs. The Trinity Aquifer system supplies critical water resources for the Texas Hill Country region, including southwest Travis County (SWTC). In 1990, a Hill Country Priority Groundwater Management Area (PGMA) was defined and designated by the State in response to existing and projected groundwater availability issues within the Trinity Aquifers of the Hill Country (Cross and Bluntzer, 1990). Recent observations suggest groundwater availability is indeed limited in SWTC. The strain on finite water resources is exacerbated by the region’s rapid population growth and economic development. In the absence of a groundwater conservation district, the area’s hydrogeology has remained poorly characterized, with pumping and aquifer conditions largely unmonitored.

This study presents a compilation of existing and new hydrogeologic data in the form of a hydrogeologic atlas with accompanying digital datasets intended to improve the collective understanding of groundwater resources in SWTC. The study was a collaboration between the Barton Springs/Edwards Aquifer Conservation District and Travis County. The data and evaluations presented herein provide a (SWTCGCD), which was created in 2017 by HB 4345 and confirmed by voters in November 2019.

The overall findings of this study corroborate the 1990 designation of the study area as a PGMA (Cross and Bluntzer, 1990). Portions of the Middle and Lower Trinity Aquifers in SWTC and northern Hays County are experiencing varying degrees of depletion and possible degradation of water quality in the Lower Trinity. Water-level data from Trinity wells in SWTC indicate an overall downward trend with minimal recovery during periods of high rainfall; in some areas, the Middle Trinity Aquifer has been almost completely dewatered. These effects are the result of the combined influence of geology, climate, and groundwater withdrawals. Furthermore, these effects vary geographically depending upon local hydrogeologic characteristics and groundwater demand (Figure ES-1). Four generalized, interconnected hydrogeologic areas are defined in this study based on these spatial variations (“Areas 1 to 4” in Figure ES-1).

The geology in SWTC appears to differ from Hays County to the south due to increased clastic sediment input that influenced geologic facies (rock types), thicknesses, and the primary porosity and permeability within the Lower and Middle Trinity Aquifers. In addition, faulting plays an important role in the geometry and aquifer boundaries of the region. In particular, the Bee Creek and Mount Bonnell Fault Zones are important structural features that appear to be at least partial barriers to regional groundwater flow and to partially compartmentalize the aquifers in SWTC. Fracturing and en echelon faulting created the enhanced karstic (secondary) porosity commonly found in central Hays County, but karstic and fracture porosity does not appear to be as well developed in SWTC.

Historic streamflow data suggest the Colorado River was a predominantly gaining stream (aquifers contributed to streamflow) prior to the construction of the Highland Lakes (TBWE, 1960). However, groundwater levels have lowered significantly in some areas since 1978 (Figure ES-1), possibly altering surface-groundwater exchange dynamics. The Colorado River and lakes may interact with the aquifers west of the Bee Creek Fault Zone, but perhaps only locally to the east of the fault zone.

This study shows that the Middle and Lower Trinity Aquifers in SWTC are experiencing moderate to significant depletion. This Hydrogeologic Atlas refines the area’s hydrogeologic framework and conceptual model, establishes current aquifer conditions, and estimates groundwater use in SWTC. The results of this study will provide a baseline for future groundwater studies of the region and help inform strategies and policies to manage and protect the region’s groundwater resources.