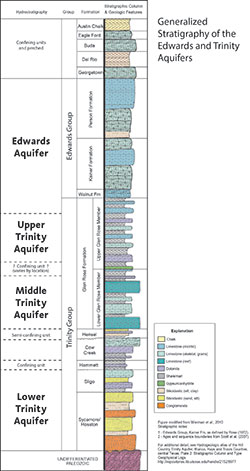 The BSEACD contains vital groundwater resources within its jurisdictional boundaries providing for municipal, industrial, domestic, recreational, and ecological needs. The Barton Springs Segment of the Edwards, the Saline (Brackish) Edwards, and the Trinity are the three main aquifers in the District.

The District has about 1,230 operational wells with about 100 permit-holders totaling about 2.2 billion gallons (6,600 acre-ft/) of annual permitted pumping (without drought reductions) in fiscal year 2008.

Aquifer units within the BSEACD range in age from Cretaceous (ca. 100 Mya) to Holocene (10,000 years ago) and consist of limestone, gravel, sand, and clay. The most prolific aquifers within the study area are composed of Cretaceous-age limestone and sand units that comprise the Edwards and to a lesser extent the Trinity Aquifers.

The Barton Springs aquifer covers about 155 mi2 and is composed of limestone that is highly faulted, fractured, and dissolved, forming a very prolific karst aquifer ranging from 0 to 450 feet thick. The Barton Springs aquifer provides the majority of groundwater within the BSEACD.  The segment is divided into essentially 4 hydro zones:  Contributing, Recharge, Confined, and Saline Zones. 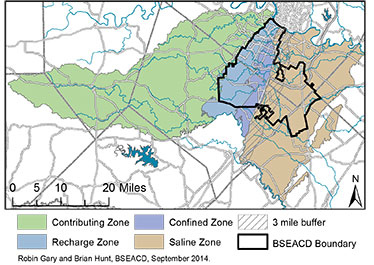 Generally, rainfall collects and runs off land in the Contributing Zone and fills creeks that cross into the Recharge Zone.  Recharge refers to water replenishing the aquifer.  The recharge zone is where the exceptionally porous Edwards limestone is exposed at the surface providing direct access to the groundwater system.  Recharge occurs mainly along the six major streams that cross the recharge zone, but also in upland areas of the recharge zone.  In creek beds and in upland areas, there are very thin to no soils to help remove contaminants before they enter the groundwater system.  So the benefit is that water can replenish the water supply, but the drawback is that the quality of that water is directly linked to land use and surface water quality.  Conservation easements, building restrictions, impervious cover limitations, high stormwater treatment standards, and most importantly, residents’ land stewardship have been effective at protecting the quality of water recharging the aquifer, so far.   With increasing development, the quality of the water in the freshwater Edwards is at greater and greater risk of contamination.

Water levels in the freshwater Edwards Aquifer vary according to the amount of water stored in the aquifer, which is dependent upon the climatic conditions. In addition, the location (Western Edwards–unconfined or Eastern Edwards–confined zones) within the aquifer can also influence the water levels and how much they may vary over time.  Barton Springs and some wells respond very quickly to recharge events reflecting their influenced by conduit (fast) permeability.  Most water wells show a combined influence of matrix (slow) and conduit flow.  Wells in the freshwater Edwards are subject to significant drought restrictions.

The Saline zone of the Edwards is located in the eastern section of the District.  Generally, water is more stagnant, and therefore, has a high concentration of total dissolved solids–making it brackish.  Water must be treated, but there are few wells, relatively large available volume of water, and few drought restirctions for water pumped from the Saline zone.  This area is the focus of many water availability and treatment studies at the local and state level.  Any permitted wells in this zone must not influence the fresh/saline water boundary. 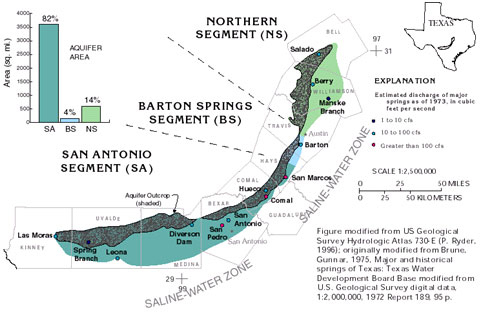 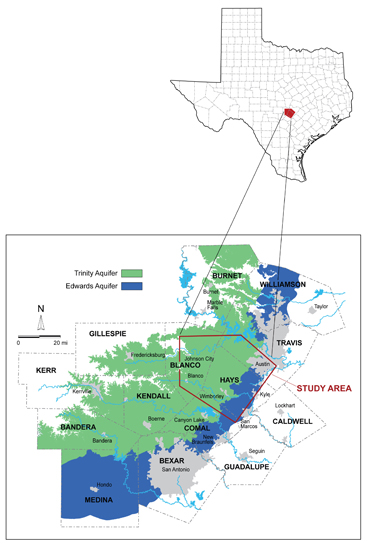 The Edwards Aquifer overlies the Trinity Aquifer system in the BFZ, but is exposed at the surface in the Hill Country.  The Trinity Aquifer is composed of the Trinity Group geologic units. The aquifer is divided into three hydrostratigraphic units, the Upper, Middle, and Lower Trinity. The occurrence of groundwater in these carbonate aquifers is primarily in fractures, along bedding planes and in karst features. Relatively abundant quantities of groundwater occur in skeletal and rudist reef facies.