As the Central Texas Hill Country and I-35 populations continue to grow, so will demands on water resources. To adequately plan for that growth, many water suppliers and utilities are exploring alternatives to diversify their supply sources and their long-term water supply strategies. Some of those strategies include brackish & desalination systems, water reuse, rainwater harvesting, and aquifer storage & recovery (ASR) systems.

Many water managers expect ASR to become an increasingly important tool for meeting future water demand as it has become a well-established technology used to improve the management of water resources in the state.

ASR is the injection (through a well) and storage of water in a suitable aquifer formation during times when water is available, and the recovery of that stored water during times when it is needed. If properly engineered and operated, the water stored in an aquifer storage and recovery system is not subject to the evaporative losses encountered in surface storage reservoirs and remains available for future use. Furthermore, ASR systems have a small footprint relative to surface-water reservoirs.

ASR activities in Texas began in the 1940s in El Paso and Amarillo and there is currently over 130 aquifer recharging programs across the United States. In Texas, there are some utilities that have successfully used ASR systems for a number of years such as San Antonio, El Paso, and Kerrville.

There are two local water suppliers in Hays County who have taken steps to perform feasibility and pilot tests for ASR. District staff have worked closely with the ASR project teams at the Ruby Ranch Water Supply Corporation (RRWSC) and City of Buda to collect data and review project plans.  BSEACD has set aside 2 cfs (472 MG/yr) of freshwater Edwards for ASR projects to be used during non-drought conditions. The District hopes that such water strategies will reduce dependence on the Edwards during times of drought and during peak demand.

RRWSC completed a four-phase ASR pilot study in September 2019 in an effort to learn more about the feasibility of injection freshwater Edwards into the Middle Trinity Aquifer. RRWSC has an existing Edwards and Trinity well pair. The project reports that have been developed describe the results of the testing. RRWSC has received an ASR permit approval from TCEQ and the application was later approved  by the BSEACD Board.

In 2016, the City of Buda completed an ASR feasibility study looking at injecting freshwater Edwards Aquifer water into the Middle Trinity Aquifer. The study evaluated the geology, hydrogeology, and water quality data of the Trinity Aquifer to be used in model and evaluate ASR feasibility. And they reviewed the results of an ASR system that has been implemented for the Ruby Ranch subdivision immediately to the west of Buda. After the Buda study yielded promising results, the City moved forward with drilling a Middle Trinity well and planning an ASR pilot project. They identified the project site near the Garlic Creek Booster Station and developed construction plans for drilling a Trinity Aquifer well near their existing Edwards Aquifer well. The City of Buda gets roughly 25% of its annual water supply from the Edwards Aquifer through permits from BSEACD. During drought Buda is subject to District drought curtailments that starts to limit that supply by 20% and potentially up to 50% during a drought of record. Development of an ASR system would allow the City to replace these pumping curtailments by recovering previously stored Edwards Aquifer water from Trinity Aquifer formations. 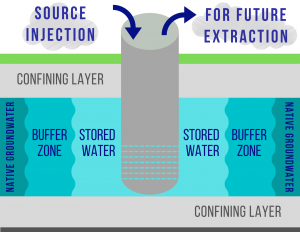 With approval of the pilot test permit, the City can begin the cycle testing and sampling process. The cycle plan will involve multiple relatively short tests of injection, storage, and recovery. Water samples will be collected to evaluate water quality changes of the stored water as it is recovered. Water levels will also be collected and the District Westbay well – about a mile due south – will be monitored during recovery. This testing will evaluate how much water can be recovered and if there are any potentially harmful geochemical reactions with the native groundwater or hydrogeological formation. The last of the cycles will include a larger volume of water and provide a longer storage period. After the pilot project is completed and a report is submitted, the City of Buda will have to submit a Source and Recovery Permit application with the District to authorize the production of Conditional Class D Edwards water (which is 100% curtailed during drought) for the ASR project and the recovery of stored water from the ASR well. This permit will have to be approved by the District Board of Directors. Once all results are in, the City will request an operating permit from TCEQ (Texas Commission on Environmental Quality).