Thank you for visiting the District’s newsroom page! Here you will find the latest press releases, videos, newsletters, and all BSEACD news.

In September, the District canceled the November 8, 2022 General and Special Elections for District Directors because each precinct only had one candidate file for their respective Districts. A total of five Directors serve on the Board, elected for staggered four-year terms.

Board Officers were also selected at the December 8, 2022 Board Meeting. Precinct 2 Director Blayne Stansberry will remain Board President, Precinct 1 Director Dan Pickens was selected as Vice-President of the Board, and Precinct 4 Director Christy Williams will remain Secretary of the Board.

The District thanks outgoing Director Craig Smith for his service and contributions to the District during his more than two decades on the Board.

BSEACD is a groundwater conservation district charged by the Texas Legislature to preserve, conserve, and protect the aquifers and groundwater resources within its jurisdiction, which includes parts of three Central Texas counties. It is governed by a Board of five elected directors and staffed with hydrogeologists, groundwater regulatory compliance specialists, environmental educators, geospatial systems specialists, and administrative support personnel.

Our District office will be closed on Monday, Sept. 5 in observance of Labor Day.

On June 9, 2022, the Barton Springs/Edwards Aquifer Conservation District’s Board of Directors declared Stage II Alarm Drought at its regular Board Meeting. The District’s drought triggers, Lovelady Monitor Well and Barton Springs, passed below their drought triggers in late May and early June respectively. Only one of the two drought stage triggers needs to be reached for a drought declaration to be made. However, to exit a drought stage, both Barton Springs and Lovelady must rise above their respective drought trigger values. This latter requirement keeps the District from making multiple declarations about drought over short periods of time.

The last groundwater drought declaration commenced on October 9, 2020, and ended on July 8, 2021. While the weather is getting warmer, strengthening La Niña (dry) conditions indicates it may be getting drier. So far, we have received below average rainfall every month this year except for February and above average heat. May 2022 was the warmest May on record for Austin. The average temperature in May was 82.3 degrees. That number was calculated by combining the high and low for each day.

End-user customers served by water utilities on groundwater wells are required to comply with their utility’s water use restrictions for this drought stage. Generally, restricting outdoor water use, including limiting landscape irrigation, pool filling and refilling, and non-essential water use such as water fountains, is sufficient to reach monthly pumpage targets for Stage II Alarm Drought. July is the first month that permittees will need to meet reductions in pumpage. Permittees should refer to the monthly drought allocations listed in their User Drought Conservation Plan (UDCP) and Drought Target Charts.

The District encourages continued conservation, with July and August often being the hottest and driest times of the year. In the summer months, outdoor water use is significantly higher and can account for 60% or more of home water use. Planting native or drought-tolerant landscapes, mulching, and using compost can substantially reduce the amount of irrigation water required to keep plants healthy.

Making sure your irrigation system is functioning at peak efficiency and replacing leaking gaskets and hoses can help conserve water. Installing a rain barrel or rainwater harvesting system can make an even bigger impact in reducing overall water use.

WHAT’S IN A SIGN? You’ve probably seen those Edwards Aquifer signs as you’re driving around Austin. But what do they mean and why should you care? Principal Hydrogeologist Brian Smith explains how recharge works and why we all need to do our part to protect the Edwards Aquifer.

Check out the District’s latest newsletter. Click on image below.

Read more newsletters in our Newsletter Archive.
Sign up for the District Newsletter.

Special Days of the Year

Click the image below for the latest drought status. Here you will find the current stage of drought based on values from Barton Springs and Lovelady monitor well, the District’s two drought trigger sites. 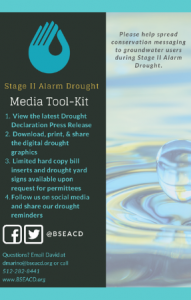 For a look at past agendas, please visit our Agendas & Backup page.