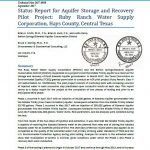 The Ruby Ranch Water Supply Corporation (RRWSC) and the Barton Springs/Edwards Aquifer Conservation District (District) cooperated on a project to test the Middle Trinity Aquifer as a reservoir for storage and recovery of fresh Edwards Aquifer groundwater. In March 2017, the Texas Commission on Environmental Quality (TCEQ) granted permission to conduct an ASR pilot project (Ruby Ranch’s Class V UIC authorization no. 5X2500126). The pilot project consists of multi-step tests with increasing volumes of injected water in each successive step predicated upon successful results at each step. This report serves as a status report for the project at the completion of two phases of testing and prior to an anticipated third phase.

From the results of the two steps of injection and extraction, it was clear that the Middle Trinity Aquifer is capable of receiving the injected Edwards water at the planned flow rates and of storing the injected Edwards water for an indefinite period of time. The chemistry of the two mixed waters also appears to be compatible as the quality of the extracted water met primary drinking water standards of TCEQ and the U.S. Environmental Protection Agency during pilot testing. Analyses for arsenic in the extracted water show that mobilization of arsenic is minimal, given conditions under which the Phase 1 and Phase 2 recovery tests were conducted.

Phase 3 of the testing is planned to begin in October 2017 and continue through May 2018, and to increase the volume of injection and the duration of storage.