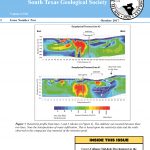 Sudden cover-collapse sinkhole (doline) development is uncommon in the karstic Cretaceous-age Edwards limestone of central Texas. This paper presents a case-study of a sinkhole that formed within a stormwater retention pond (SWRP) in southwest Austin. Results presented include hydrogeologic characterizations, fate of stormwater, and mitigation of the sinkhole.

To determine the path, velocity, and destination of stormwater entering the sinkhole a dye trace was conducted. Phloxine B was injected into the sinkhole on February 3, 2012. The dye was detected at one well and arrived at Barton Springs in less than 4 days for a minimum velocity of 2 km/day (1.3 mi/day).

Review of pre-development 2-foot topographic contour and geologic maps reveals that the SWRP was built within a broad (5,200 m2; 6 acre), shallow depression bounded by two inferred NE-trending fault zones. Photographs taken during SWRP construction showed steep west-dipping bedrock in the northern SWRP wall. Following collapse of the sinkhole, additional hydrogeologic characterization included excavation to a depth of 6.4 m (21 ft), surface geophysics (resistivity), and rock coring. Geologic materials consisted mostly of friable, highly altered, clayey limestone consistent with epikarst in-filled with terra rosa providing a cover of the feature. Dipping beds, and fractured bedrock support proximity to the mapped fault zone. Geophysics and surface observations suggested a lateral pathway for stormwater flow at the junction between the wet pond’s impermeable geomembrane and compacted clay liner for the retention pond. The collapse appears to have been caused by stormwater down-washing poorly consolidated sediments from beneath the SWRP and into a pre-existing karst conduit system.

Mitigation of the sinkhole included backfill ranging from boulders to gravel, a geomembrane cover, and reinforced concrete cap. Additional improvements to the SWRP included a new compacted clay liner overlain by a geomembrane liner on the side slopes of the retention pond.