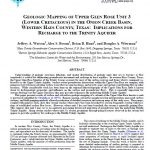 Understanding of geologic structure, lithology, and spatial distribution of geologic units that act as barriers to flow (aquitards) is critical for delineating groundwater movement and recharge in karst aquifers. In western Hays County, Texas, the Upper Glen Rose Member of the Trinity Group accounts for most of the surface outcrop and forms what is commonly referred to as the Upper Trinity Aquifer. Surface water/groundwater interactions within the Upper Glen Rose are complex, with numerous karst features pirating surface water flow in some locations, and gravity seeps and springs contributing flow in other locations. While considerable work has been done on the regional lithostratigraphy of the Upper Glen Rose, little is known about its hydrogeologic properties and influence on the surface and groundwater flows. This is especially important for streams flowing over the Upper Glen Rose that may provide recharge to the underlying Middle Trinity Aquifer.

This paper presents results of surface and subsurface geologic mapping of a subunit of the Upper Glen Rose known as unit 3, previously identified by Stricklin et al. (1971). Remote sensing, subsurface geophysical log interpretation, measured surface sections, and field mapping methods allowed production of detailed structure and outcrop maps of the study area. These maps, coupled with gain/loss data, show that stream reaches where unit 3 has been breached by erosion frequently overlap with locations of established surface flow losses. However, where unit 3 has not been breached, the stream is generally gaining flow. This suggests that unit 3 may act as an aquitard, preventing downward migration of groundwater into the underlying Middle Trinity Aquifer. Along stream reaches where unit 3 is absent, prominent through-going fractures observed in the stream bed appear to provide a pathway for recharge to the Middle Trinity Aquifer.