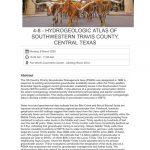 The Hill Country Priority Groundwater Management Area (PGMA) was designated in 1990 in response to existing and projected groundwater availability issues within the Trinity aquifers. Anecdotal reports suggest current groundwater availability issues in the Southwestern Travis County (SWTC) portion of the PGMA. In the absence of a groundwater conservation district, the area’s hydrogeology remained poorly characterized and pumping and aquifer conditions were largely unmonitored. This study presents a compilation of existing and new hydrogeologic data to develop a better understanding of groundwater resources in SWTC.

Water level and geochemical data indicate that the Bee Creek and Mount Bonnell faults are important structural features restricting regional groundwater flow. Fieldwork, borehole geophysics and drill cuttings suggest that clastic input from the Llano uplift influenced carbonate facies and unit thicknesses, and reduced primary porosity and permeability within the Middle Trinity aquifer. Fault-impeded recharge, reduced porosity and increased pumping have combined to reduce water levels in the Middle and Lower Trinity aquifers by hundreds of feet over the last 40 years. Water levels in Lower Trinity monitor wells have consistently declined up to 3 ft/yr, indicating that groundwater mining is occurring. Historic Middle Trinity wells have become unusable in portions of SWTC due to water level declines, and new wells typically target the Lower Trinity aquifer. Over 2000 wells were drilled in SWTC since 2003; of these, over 70% target the Lower Trinity. We estimate that 1.4 billion gallons of groundwater is pumped per year in SWTC, of which 60% is from the Lower Trinity. This is in contrast to neighboring Hays County, where the Middle Trinity is fully saturated and is the primary groundwater source. These evaluations corroborate the designation of the study area as a PGMA and underscore the need for groundwater management and further study. The Hydrogeologic Atlas has refined the area’s hydrogeologic framework and conceptual model, established current aquifer conditions, and estimated groundwater use in SWTC. These data will provide a baseline for future groundwater studies of the region and help inform strategies and policies to manage and protect the region’s groundwater resources.