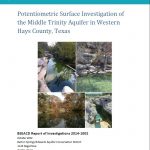 Pleasant Valley Spring (PVS) and Jacob’s Well Spring (JWS) are large karst springs providing perennial baseflow to the Blanco River and Cypress Creek, respectively, which eventually recharges the Edwards Aquifer. JWS flow has become intermittent in recent years due to drought and increased pumping driven by nearby population growth within the Cypress Creek watershed. In order to better understand groundwater flow and sources of recharge to these springs (springsheds), we created a potentiometric map of the area surrounding the springs from water level measurements (n=59) taken in July 2013. Springflow measurements (n=9) were taken to document PVS springflow from Dec. 2012 to Aug. 2013. Results indicate that general groundwater flow is NW to SE in the study area, parallel to the direction of structural dip of Middle Trinity strata. Potentiometric gradients increase from 15ft/mi in recharge areas to 60ft/mi in the confined zone SE of the springs and major faults in the Balcones Fault Zone (BFZ). Potentiometric data suggest the Blanco River watershed, including and area of exposed Cow Creek Fm in the river, is a source of recharge for PVS. Potentiometric data suggest the source area for JWS could be limited to the Cypress Creek watershed, although contributions under differing hydrologic conditions could also include the Blanco River. We interpret a potentiometric trough, which represents a preferential flow path, surrounding the mapped JWS cave passage extending NW along Cypress Creek. A small potentiometric ridge is present between the Blanco River and Cypress Creek watersheds, suggesting a localized hydraulic separation between PVS and JWS. Additional evidence for hydrologic separation of the JWS and PVS springsheds was demonstrated by the differential springflow response to a large storm on May 25-26, 2013. PVS increased significantly in response to increased Blanco River flows, while JWS did not respond. These data help to define the source areas for PVS and JWS and suggest under drought conditions they may have independent springsheds. These data have implications for groundwater management and the preservation of springflows.