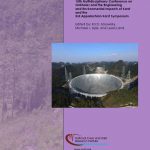 Increased demand for groundwater in central Hays County is prompting studies to evaluate the availability of groundwater in the Trinity Aquifers of central Texas. These aquifers, consisting mostly of limestone, dolomite, and marl, exhibit varying degrees of karstification. Near the surface, karst features such as caves and sinkholes are evident, but are widely scattered. Even at depths greater than 400 m (1,300 ft), units that are mostly limestone show some degree of karstification where dissolution along fractures has caused development of conduits. Studies are being conducted to better understand the horizontal and vertical flow components of the Trinity Aquifers. These studies involve aquifer testing, groundwater geochemistry, geologic and structural mapping, flow-loss/gain measurements in streams, hydraulic head measurements, dye tracing, and installation of multiport monitor wells. The Middle Trinity Aquifer meets the definition of a karst aquifer due to its conduit permeability within soluble rocks. However, the same aquifer has contrasting properties that are separated by the complex Tom Creek Fault Zone. The westerly Hill Country Middle Trinity Aquifer is a shallow karst aquifer system characterized by rapid conduit flow and active surface and groundwater interactions. In this area, Middle Trinity units are situated at or near the surface. To the east, the Balcones Fault Zone Middle Trinity Aquifer is a deeply confined karst aquifer system with more limited conduit development, slower groundwater flow, and no direct surface-groundwater interactions. In this area, Middle Trinity units are encountered at depths of 150 m (500 ft) or greater. The results of this study will influence future hydrogeologic and resource evaluations and modeling of the Middle Trinity Aquifer.