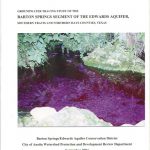 Groundwater tracing conducted in the Barton Springs segment of the Edwards Aquifer from 1996 through 2000, has provided new insight on groundwater flow directions and velocities.  A groundwater tracing study performed by the Barton Springs/Edwards Aquifer Conservation District and the City of Austin has measured groundwater velocities and destinations from 17 natural recharge features and one well within the Barton Springs segment.  A total of 20 traces were conducted in all the major contributing watersheds supplying water to Barton Springs, including Barton, Williamson, Slaughter, Bear, Little Bear, Onion Creeks, as well as the Blanco River.   This study accomplished its data quality objectives by detecting 85% of the traces in at least one monitoring site.

To conduct the traces, up to five distinct organic tracers were used: fluorescein, rhodamine WT, eosine, sulforhodamine B, and pyranine.  The tracers were injected into caves, sinkholes, and other recharge features and were generally flushed into the aquifer with about 10,000 gallons of water.  In one trace, dye was poured into a well that was flushed with creekwater flowing adjacent to the well.  Activated charcoal receptors were placed at wells and springs where tracer arrival was possible, in order to adsorb cumulative concentrations over the placement duration.  Grab samples were also collected to measure tracer concentrations at specific times.  Potentiometric surface, geological, and cave maps were used to estimate groundwater-flow paths in between the tracer detection sites.

The results of this study demonstrate that groundwater recharging the Barton Springs segment in the Barton and Williamson Creek watersheds travels either north or northeast towards either Barton or Cold Springs.  Portions of the upper Recharge Zone of Barton Creek (from the Mount Bonnell Fault down to the Loop 360 crossing) and Williamson Creek (from Highway 290 down to the Brush Country Road crossing) contribute flow to Cold Springs and other springs on the south bank of the Colorado River rather than Barton Springs.  The groundwater in this area generally converges to a preferential flow path called the Cold Springs Flow Route.  The Cold Springs groundwater basin within the Barton Springs segment of the Edwards Aquifer is about 11.8 square miles.

Groundwater recharging the Barton Springs segment in the Slaughter, Bear, Little Bear, and Onion Creek watersheds generally flows east towards a wide potentiometric trough that parallels the east side of Manchaca Road from Manchaca/San Leanna northeast to Barton Springs.  The primary identified preferential groundwater flow path for recharge from these watersheds is known as the Manchaca Flow Route.  Groundwater recharging these watersheds feeds the Manchaca groundwater basin and discharges from the Main, Eliza, and Old Mill outlets of Barton Springs. Under some conditions, Slaughter Creek watershed may supply Upper Barton Springs through overflow routes, based on cave observations at the water table near the estimated divide separating the Sunset Valley and Manchaca groundwater basins and from detections of tracer moving across this divide following storms.

In most cases, the peak concentration reached the discharge spring within hours after the initial arrival of the tracer, suggesting a system with a high component of advection relative to dispersion and diffusion.  Tracer recoveries are calculated to range from 0% up to about 77%, with a mean recovery of about 16% and a median recovery of about 4.2%.  The amount of tracer recovery did not vary directly with distance from the injection point to the discharge springs.  The rapid travel rates and strong tracer recoveries measured during the study suggest that distant groundwater recharge sites, including those in the Williamson, Slaughter, Bear, Little Bear, and Onion creek watersheds, are strongly connected hydraulically to Barton Springs.

The results of this groundwater tracing study provide information necessary to improve wellhead protection, to anticipate the fate of a hazardous material spill on the Recharge Zone, to assist in developing monitoring strategies, to prioritize purchases of water quality/quantity protection lands, and to evaluate sites for potential recharge enhancement. This study has helped identify some preferential groundwater flow paths that are the major sources of Barton and Cold Springs.