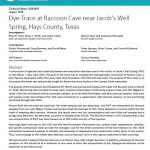 A consortium of agencies and scientists planned and executed a dye-trace test in the vicinity of Jacob’s Well Spring (JWS) in late March – early April 2018. The goal of the trace was to evaluate the hydrogeologic connection of Racoon Cave, a karst feature developed within the Lower Glen Rose formation, with JWS and area wells. The purpose of this memo is to document this tracer test and provide insight for future dye-trace studies in the Cypress Creek watershed.

Five pounds of the fluorescent dye Rhodamine WT (RWT) was injected and flushed with water into Raccoon Cave on March 27, 2018. Monitoring sites included five area wells, locations downstream of JWS along Cypress Creek, and JWS (Figure 1). Jacob’s Well was monitored with an automatic sampler, an in situ field fluorimeter, and daily charcoal samples. Area wells and Cypress Creek downstream from JWS were monitored on a weekly basis with charcoal samples. All dye monitoring continued through May 2018.

Results from the dye trace are equivocal. No water samples had dye detections, and RWT was interpreted for charcoal samples from two wells (Baker, Flocke) and Cypress Creek downstream of JWS. These detections occurred within the first week of sampling after injection. However, the results were very low concentrations and one of the well samples had a background detection. No detections occurred on samples after 6/4/18. The field fluorimeter in JWS indicated that a very low concentration of RWT may have flowed out of JWS within one day of the injection.

Hydrologic data collected by the USGS and the field fluorimeter (instrument also collects water temperature, turbidity, and specific conductance data) provide the strongest case for the direct connection of the karst features to JWS. Both instruments measured increases in turbidity and decreases in temperature and conductivity within hours of rain events. Thus, local recharge to JWS within karst features, such as Raccoon Cave, in the Cypress watershed is likely occurring.

We recommend a repeat of the dye trace occur at Racoon Cave with a larger dye mass. In addition, placement of charcoal receptors at JWS should be at a minimum of one week to allow the accumulation of dye. Background analyses will be important to any future study.