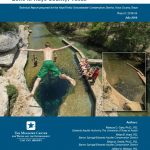 The Hays Trinity Groundwater Conservation District (District) is charged with managing the groundwater resources within its jurisdictional boundaries. Jacob’s Well provides baseflow to Cypress Creek, which in turn provides ecological, hydrological, and financial benefits to the Wimberley region. Recognizing the importance of springflow from Jacob’s Well, the District’s Board of Directors formed the Scientific Technical Committee of groundwater scientists and tasked the committee with evaluating a potential groundwater management zone in collaboration with the Stakeholder Advisory Committee. The primary goal of this evaluation is to apply a scientifically-based approach to delineate an area in which strategies could be applied that lead to the preservation of springflow and baseflow in Cypress Creek during periods of drought.

The Scientific Technical Committee identified three areas that have a strong hydrologic connection to Jacob’s Well (Figure ES-1). In other words, Jacob’s Well springflow is very sensitive to recharge and pumping influences in these areas. Each area has unique hydrologic and hydrogeologic features that influence the flow to Jacob’s Well. These features were considered as the basis for creating groundwater management zones. Evaluations indicate that most of the flow to Jacob’s Well can be explained by recharge occurring in an area defined as the Jacob’s Well Springshed, and that pumping in that area has direct effects on springflow. However, recharge to the Middle Trinity Aquifer likely occurs in a larger area of western Hays County, and thus may also provide some flow to Jacob’s Well under certain conditions. We define this additional area as the Regional Recharge Area, which corresponds to a portion of the springshed for Pleasant Valley Spring. The Tom Creek Fault Area represents an area in hydrologic communication with the upgradient Jacob’s Well Springshed and potentially the Regional Recharge Area.

We combined the three hydrologic areas into two groundwater management zones (Figure ES-1). A reduction of pumping during drought periods from current levels of pumping will result in increased springflows. A variety of demand reduction and alternative supply strategies having various levels of time and scale will need to be implemented to achieve the desired Jacob’s Well flow goals.

A regional strategy includes developing an effective drought-trigger methodology that uses Jacob’s Well as one of the drought indicators. Specifically, within the Jacob’s Well Groundwater Management Zone, strategies could include increased drought curtailments based on existing non-exempt pumping. These curtailments could be offset with alternate water supplies such as aquifer storage and recovery, interconnections, development of the Lower Trinity quifer and rainwater harvesting. Future Middle Trinity Aquifer pumping would need to be capped and alternative supply options promoted.

The Regional Recharge Area Groundwater Management Zone presently has less non-exempt pumping, and thus has less impact to Pleasant Valley Spring and Jacob’s Well. However, with anticipated growth and associated increases in pumping in the area, negative effects on future springflow at Pleasant Valley Spring are expected similar to those observed at Jacob’s Well. Additional monitoring and water-balance studies to determine sustainable pumping rates are recommended. Implementing proactive management and rules to limit future pumping in the Middle Trinity Aquifer to encourage alternative water supplies is also recommended.