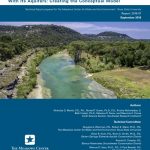 The Blanco River watershed spans five counties through the Texas Hill Country and supplies water to some of the fastest growing population centers in Texas, if not the country (Figure ES – 1). Over this reach, the Blanco River is both fed by and feeds the Trinity and Edwards aquifers, blurring the line between groundwater and surface water. It is a source of water to iconic springs such as Pleasant Valley Springs, Jacob’s Well Spring, and San Marcos Springs. Even outside of its own watershed, the Blanco River watershed has been shown to contribute to flow in Barton Springs of the Edwards Aquifer during periods of low flow and drought. This makes the Blanco River an essential consideration in maintaining the delicate environmental flow balance of these springs and water courses.

There are impending threats to the health of the Blanco River and the aquifers it overlies. A growing population is placing increased demands on water resources. Pumping from the Trinity Aquifer, with much of this coming from the Middle Trinity Aquifer, has continuously increased and already lowered aquifer water levels. In 2000, 2008, 2009, 2011, 2013, 2014 and 2018 Jacob’s Well Spring temporarily ceased to flow as a result of increased pumping combined with periods of drought. Local demands on groundwater will only increase with development compounded by commercial interests that seek to extract large quantities of water from the Trinity Aquifer to sell and transport it elsewhere. Combined with changing weather patterns, threats to the water resources of this fragile area can only be expected to increase with time.

With unknown effects of changing weather patterns due to global climate change combined with the threat of increased pumping, there is a need to better understand the Blanco River and groundwater interactions. During recent periods, local groundwater conservation districts, including the Edwards Aquifer Authority, have collected data and studied the hydrogeology of the region. Although much
effort has been undertaken to compile and comprehend the significance of these vast quantities of data, additional challenges remain. Of particular need are tools that would enable comprehensive management of the combined surface water and groundwater resources. Given the inherent linkage of these water resources, it is imperative that these tools accommodate the inter-relationship between surface water and groundwater. Of critical need is an integrated hydrologic model with sufficient capability to replicate the impact that changes in weather patterns (i.e., precipitation and recharge) and water-management scenarios (i.e., groundwater extraction for local or external uses) will have on both surface water and groundwater in light of the complex relationship between the Blanco River and the underlying aquifers. At this time, no such comprehensive models or tools are available.

The geographical extents of the Blanco River and Onion Creek watersheds are illustrated in Figure ES – 1 and Figure ES – 2. What is not as clearly defined are the extent of the aquifers which underlie and interact with the Blanco River watershed and the downstream extent of the aquifers which are hydraulically connected and impacted by the lower Blanco River. Defining the extent of the study domain of this project is of critical importance to ensure that the tools developed by this project are capable of and appropriate to address the technical and programmatic questions facing the Blanco River watershed. Of concern is how far beyond the Blanco River watershed should the model domain extend to appropriately represent groundwater flow in the Trinity and Edwards aquifers as it pertains to interaction with Blanco River system. Accordingly, the study area has been extended outside of the Blanco River watershed to include the Onion Creek watershed to the northeast and the headwaters of the San Marcos River and other areas to the south and east. This extension, which also includes a fault-bounded section of the Edwards Aquifer, enables the model to address periods of drought when the direction of groundwater flow within the Balcones Fault Zone can change with the result of a relocation of the groundwater divide that separates the contributing zone for San Marcos Springs from the contributing zone for Barton Springs.

A conceptual model of the Blanco River watershed and the underlying Trinity and Edwards aquifers was assembled to bring together disparate data and combine it into a framework that is useful for policy makers to have a better understanding of the complex relationship of the Blanco River and the underlying aquifers Figure ES – 3.This conceptual model describes the connections between the Blanco River and the underlying aquifers and the constraints between surface water and groundwater flow in the study area. It is the first stage in developing an integrated hydrologic computer model to be used for examining and optimizing water-management practices with respect to expected increases in groundwater pumping and changes in long-term average weather, or climate.

A critical question regarding the Blanco River watershed is to what degree increased development will affect the environmental health of flow in the Blanco River and its tributaries and discharge of the major springs, including Pleasant Valley Springs, Jacob’s Well Spring, San Marcos Springs, and Barton Springs. Although the refined conceptual framework model described in this report provides insight on these questions, rigorous evaluation of these impacts can only be undertaken if an integrated hydrologic model of the study area is developed. The conceptual framework model described in this report and the supporting geodatabase provide the basis for development of an integrated hydrologic model of the desired model domain.