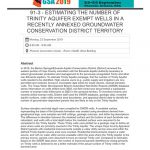 In 2015, the Barton Springs/Edwards Aquifer Conservation District (District) annexed the eastern portion of Hays County coincident with the Edwards Aquifer Authority boundary to extend groundwater protection and management to the previously unregulated Trinity and other non-Edwards aquifers. To estimate Trinity Aquifer pumpage, first the number of Trinity Aquifer wells needed to be identified. High-volume users (e.g., public supply and irrigation) are now permitted and metered, however, incomplete data exists for small-volume, exempt domestic wells. The Texas Water Development Board’s Submitted Well Driller Reports (SWDR) database stores information on wells drilled since 2003, but field visits have documented a substantial number of exempt wells drilled prior to 2003 in the annexed territory. To inventory historic and recently drilled exempt wells, District staff used the SWDR database, geologic data, modeled aquifer surfaces, water utility service area boundaries, and appraisal district data to identify the number of groundwater-dependent parcels that are likely to rely on the Trinity Aquifer.
Surface elevation and total depth were compiled for SWDR wells. A modeled surface representing the base of the Edwards formation was created using elevations derived from geophysical logs, core samples and drill cuttings, geologic outcrops, and driller-log descriptions. The difference in elevation between the modeled surface and the bottom of each borehole was calculated, and wells with a total depth below the modeled surface were assumed to be completed in the Trinity Aquifer. Those Trinity wells were plotted on a geologic map to define an area where wells are primarily sourced in the Trinity Aquifer. The unique Hays County Appraisal District parcels with residential improvements outside a water utility service area and within the defined Trinity Aquifer source area were counted. Residential improvements require a water source, and with no water utility service available within the area where the Trinity Aquifer is the primary source, parcels were assumed to have an exempt Trinity well. Compared to estimates based on the SWDR data alone, the number of improved parcels identified as relying primarily on Trinity wells is believed to be a better estimate of the actual number of Trinity wells in the annexed area.