A five-member Board of Directors, elected for staggered four-year terms, is the governing body of the District and ensures the District’s work is consistent with the statutory mission, District rules, and local priorities.  Directors are elected in the November general elections of even-numbered years (starting in 2012) by the registered voters in five single-member precincts.  Under provisions of its enabling legislation, now codified at Special District Local Laws Code Chapter 8802, no more than two of the directors, a voting minority, may reside in the populous single-member precincts that represent the more urban areas associated with the City of Austin and its surface water-based utility; a majority of the directors (three) must reside in single-member precincts that represent the more rural areas of the District, which are dominantly based on groundwater supplies. 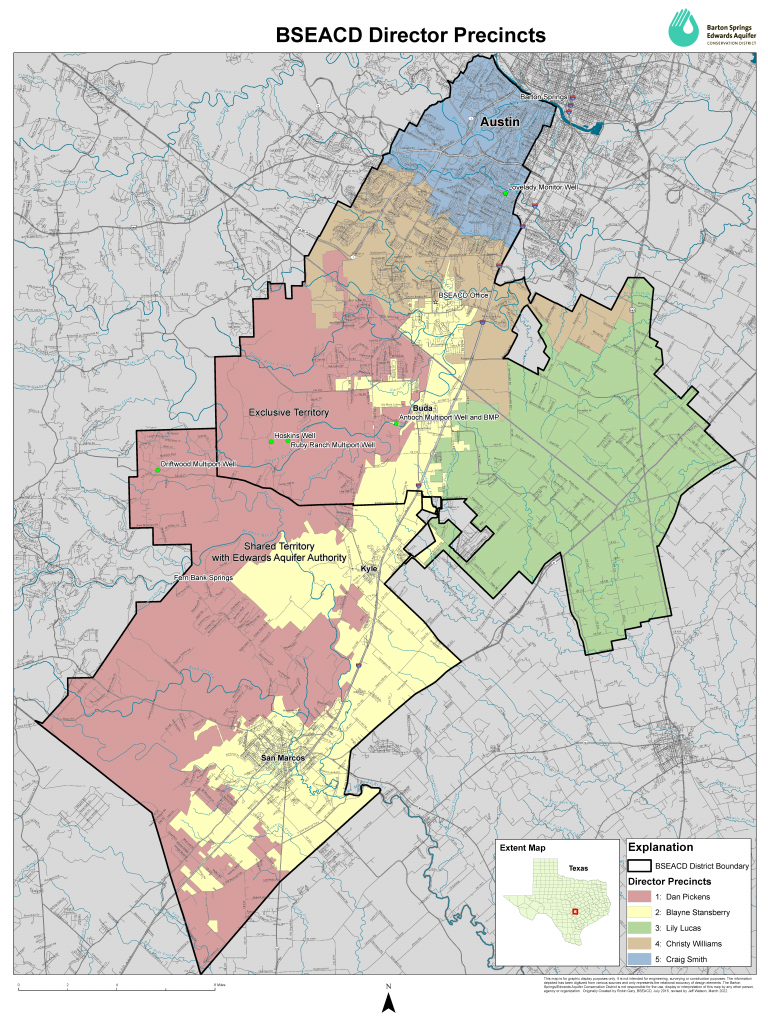 After the 2010 Census data were analyzed, Barton Springs / Edwards Aquifer Conservation District’s previous boundaries of the Board of Directors precincts did not produce sufficiently equal population and had to be redrawn in order to comply with the “one-person, one-vote” principle established by the U.S. Constitution and with other applicable Texas law.

In response to House Bill 3405, The Board of Directors of the Barton Springs / Edwards Aquifer Conservation District held a Public Hearing, discussed preliminary Redistricting Plans in two open meetings, and invited public comment (both written and in person) on new boundaries for its director precincts to include the newly added shared territory. After consideration of public input, the Board of Directors voted on and adopted new precinct boundaries at the May 26, 2016 Board Meeting.

The Barton Springs/Edwards Aquifer Conservation District (District) Board of Directors adopted new Director Precinct boundaries at their March 10, 2022 Board meeting. The Board’s decision was preceded by a public hearing, also held at the March 10, 2022 meeting. In accordance with State and Federal law, after each federal decennial census, the board must revise the single-member districts. The 2020 federal decennial census was released in August 2021. The District worked with the law firm of Bickerstaff Heath Delgado Acosta LLP to act as the District’s redistricting consultant, including advising and assisting the Board in preparation of a new redistricting plan in compliance with applicable requirements of state and federal law.

Below is the adopted resolution and new Director Precinct Maps:

By statute, the Board must meet at least bi-monthly, but generally the Board meets at least semi-monthly.  All Board and Board advisory committee meetings are open to the public.  In November of each year, the Board elects its President, Vice-President, and Secretary for the year. The Board also appoints ad hoc advisory committees to review various activities and procedures and make recommendations to the District. These committees are made up of local citizens and other stakeholders who are knowledgeable about environmental and economic concerns within the District as well as technical specialists in various fields. The approved minutes of all Board meetings and advisory committee meetings for at least the prior 12 months are available on this website [here]; older ones are archived and available by request of the District’s Records Management Officer (bseacd@bseacd.org).

The Board sets policies and adopts rules and bylaws to operate the District and takes action stipulated by the Rules and Bylaws in executing the District’s mission. Directors hire a general manager, who serves as the chief operating officer to carry out the programs according to the Rules and Bylaws. The general manager employs and supervises a technical staff to administer programs; study, monitor and manage the aquifer systems; provide education and outreach to the groundwater-user community; and carry out research in support of the District’s programs. The general manager serves as a bi-directional liaison between the Board and the staff. More information on the current District staff may be found [here].

Board members are active participants in the various communities that comprise the District’s stakeholders. They serve on state-level and local committees and working groups to address issues that affect groundwater.    Directors are an integral part of the District’s outreach, speaking by invitation on issues related to groundwater use, resource quantity, and quality, including legislation, policy and practices, and general information about the aquifer and the District’s programs.