The U.S. Fish and Wildlife Service (USFWS) has finalized and issued a 20-year Incidental Take Permit (ITP) to implement the District’s Habitat Conservation Plan (HCP) for Managed Groundwater Withdrawals from the Barton Springs segment of the Edwards Aquifer. The HCP will safeguard the continued sustainable use of the aquifer and survival of the endangered salamanders, while the ITP will allow for continued managed pumping of the aquifer by District permittees. 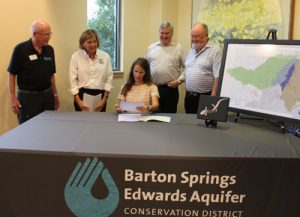 The District applied to the US Fish & Wildlife Service (Service) for an Incidental Take Permit under Section 10(a) of the federal Endangered Species Act.  The approved District HCP avoids, minimizes, and mitigates adverse effects of certain activities of the District and its permittees on the two endangered species at Barton Springs, the Barton Springs salamander and the Austin blind salamander.  The HCP was developed, refined, and reviewed through a rigorous public process over the last fifteen years and has benefitted from input and recommendations from stakeholders, subject experts, and advisory committee members.

Inquiries concerning this project should be directed to:

Much more information about HCP in general and this project in particular is included on subpages in this part of the website: